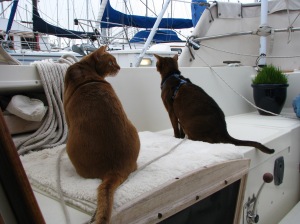 Makani and Kai, both Abyssinians, are the most hilarious, loving, and cooperative crew I could ask for.  Makani AKA Big Bad Boy is 6, fat, and most of the locals who see him and interact with him think he’s a dog.  I won’t be surprised when he barks…  Little Kai is my 10 year old scaredy cat, who’ll jump at her own shadow but LOVES dogs.  Makani wants to eat dogs, until of course he gets close to them, and then he wants to climb me.  But Kai loves dogs, trots right up to them and wants to touch noses.  Both of these monsters are doing a fine job on this boat.  Kai is making sure she holds the cushions in place, and Makani is singlehandedly attempting to remove all moths from the planet.  (In Ventura, he was trying to remove all crabs, but they just hid in my shoes…)

3 thoughts on “My Hapless Crew…”