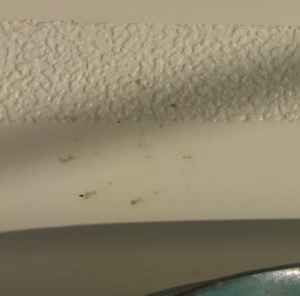 NOT a handprint, a raccoon print…

Hi Everyone! I’ve been back in the states about 5 1/2 weeks now, and it’s been action packed. Not the same type of action I’ve been used to, but pretty interesting all the same. I came back up to California to help my mom out for a few months. She was hurt in a fall, and just needed a hand to get back on her feet. She’s doing well now, and I think I’ll be able to spend more and more time down on Willow soon, and that’ll be good.

Willow’s doing well, but my time to work on her has been greatly decreased. Shortly after I arrived in San Diego, the boat was invaded by raccoons. What a mess! All of my linen on the v-berth was destroyed, and my settee cushions were so dirty. There was a very strong and gamey aroma throughout that was really pretty bad. I had to replace all of my bedding, as the varmint(s) urinated and defecated numerous times, and it seeped through to the foam mattress topper. I removed and laundered all of the upholstery in the cabin, and then sterilized all flat surfaces, as there were tiny ‘handprints’ everywhere. To add insult to injury, the masked bandits broke in again after all this work had been done. I phoned the marina office and told them of the second violation and they just laughed at me. Unfortunately, I wasn’t in the laughing mood looking forward to repeating all of the work I had just done. I requested to be moved far away from the dock I was on, as I felt the varmints had my boat’s scent hard-wired on their brains. I was moved two docks over and all the way at the opposite end of the finger, making the critters really have to hunt Willow down. I felt much better.

After moving the boat to the new slip, I could finally wash off all of the offending ‘handprints’ from my deck and gelcoat. I put Willow’s interior back to the fine way it was, and I enjoyed a few nights of sleep in my new and re-cleaned bedding. Walking the dock one day, I spotted a dockmate from the first dock I was on. Chuckling, he told me that the raccoon had finally been trapped that morning. He said there was a new boat on the main walkway that had been trailered down from the California Delta area. I guess the boat had been in the owner’s driveway for awhile. Once the boat was here in San Diego, the owner splashed the boat and put it in its side-tie and left. Two weeks later, he came down to step the mast and put the boat back together. When he opened up the tiny cabin, 5 sets of eyes were staring him down and chattering at him. A momma raccoon had pupped four babies, and they’d been living down on his boat here for the past few weeks. He called the marina and told him his story, and they found a ‘raccoon guy’ who lives in the local foothills. The expert came down and trapped the five bandits, telling the boat owner he’d keep momma and the babies together for eight weeks and then let ’em loose up in the mountains. Turns out, the momma raccoon foraged on 4-5 other boats during this time period, and the marina finally figured I wasn’t a crazy, hallucinating new tenant. Just a crazy one… Even better, I re-located Willow back to the original dock finger today, as the new slip was larger, and if I stayed there, I’d be paying more in slip fees. In the second slip, it turns out the varmints HAD actually found me. On the port side of the boat, I found new ‘handprints’ signaling the raccoons had found Willow. Good thing she was buttoned up tight! Now that they’re gone, I’m relieved to know the boat won’t be damaged anymore.

Another funny thing happened this morning, as I was moving Willow back to her original dock. Just as I was backing the boat out of the slip, a good friend returned an earlier phone call. Rather than not answer, I just decided to do a harbor/bay putz while we caught up on the phone. As I was motoring around San Diego Bay, I noted how nice it was to be out of the slip and get the engine running. I remembered a friend of mine was to haul his boat out of the water this morning, and maybe I could see him under way. I looked in the direction of his mooring, and saw a small sailboat with a mainsail only up. Probably was him. Then my phone rang again, and sure enough, it was Tony, and he was wondering if I was in the San Diego area. Seems his engine had just failed, and he was looking for a little help. I asked him if he was the little boat with the main only up, and he said he was over by the large bait barge. Yup, that was him! I offered to long-tow him over to the shipyard and ‘whip’ him into the side-tie where the travel lift was. Sounded good to him! We accomplished this without a hiccup, and after, I wondered at the Providence that just made me go out on a harbor putz this morning. Thanks for calling me back, Sally! I think Tony thanks you, too!